Do you know who the first Iranian, and among the first few Space tourists is? You may not have heard of Anousheh Ansari – but she is a truly global icon for space research and one of the most inspiring characters I have ever met. 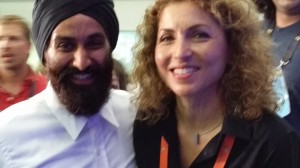 Her passion for space studies and her narrative having witnessed the borderless planet from above awed every attendee of her lecture. Every single attendee was amazed after having watched Anousheh float around in the zero-gravity state in the International Space Station wishing they were the ones watching the planet from above – in first hand and not through a video.

Anousheh is convinced that if everyone gets the opportunity to see the planet from above, experience the peace in first hand it would give us all perspective to the minor troubles and challenges we are facing – and how humanity – collectively can solve all major world problems.

It was especially inspiring for many female attendees witnessing how a hard working woman – an entrepreneur was able to singlehandedly train in Russia (which required learning basic Russian) for nine months prior to the mission – with her husband standing outside waving at her as she walked towards the shuttle.

Another project we got to learn about was the Sentinel and how they are developing an observatory using infrared technology to tare Asteroids pathways – especially though near the earth’s Orbit. Whats most fascinating is that we, many times, get to hear the founders of the project talk about “their babies” and what drives them to develop the technology. In Sentinel’s case it’s the fact that we, through history, have witnessed numerous asteroid impacts which have had a fatal result on the organisms on our planet – and by tracing the near earth asteroids we would be able to divert their path and thereby saving our planet (and life on it) from the fatal consequences of an impact!

Enough for tonight: tomorrow is a national holiday here in the US – the 4th of July is celebrated as Independence Day here – and I’m looking forward towards celebrating it the American way in San Francisco. Independence Day celebration is going to be followed by a visit to Yosemite National Park where almost 50 of Singularity’s 80 students are going to camp for the weekend!

The Star from the East.